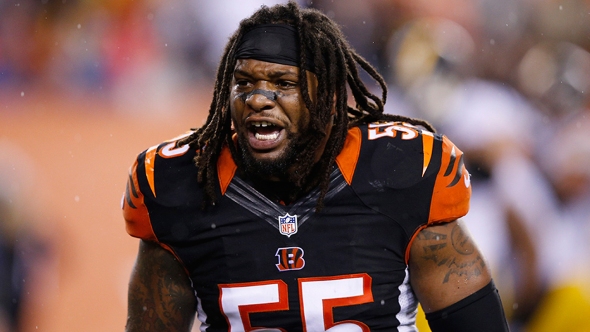 Entering the 2017 season, Vontaze Burfict has amassed a total of $805,000 in fines in his career. (Joe Robbins/Getty Images)

Travis Kelce of the Kansas City Chiefs is undoubtedly one of the better tight ends in the NFL currently. Since entering the league in 2013 Kelce has managed to work his way to two pro bowl appearances, and has often been referred to at times as “Baby Gronk.” As you could probably guess this makes me (a diehard Patriots fan) furious. Simply because I think if anything they don’t really have all that much in common besides wearing the number 87 and being amongst the top of the TE rankings this season.

We all know Rob Gronkowski loves to enjoy himself in the offseason and embraces being able to show the party animal that he is. But when it comes down to the NFL season and preparing each week to gear up for battle, he is as professional and hardworking as they come and keeps himself in check on the field. Now I’m not saying Travis Kelce doesn’t work hard, but Kelce is consistently being flagged for unnecessary roughness, taunting, and just being an all-around jackass on the field all the time. I can’t stand the cocky loudmouth attitude, especially when you have incredible talent and always hurt your team with air head penalties. Not at all a fan of this kind of player, which is why Kelce lands the number 5 spot on my list.

Just saying the name Keenan Allen makes me frustrated, and believe me I have my reasons. This is a guy who has always been viewed as a middle to high tier receiver and deep threat but usually will fail and let you down from a fantasy perspective. I’ve never bought into any Keenan Allen hype throughout his career but believe me, I tried to give him a shot. This “shot” I gave him was drafting him in fantasy football a few years back only for him to get injured per usual. Staying healthy has been an issue throughout the duration of Allens NFL career thus far, and then one day…. my disliking for this man grew to an all-time high.

Keenan Allen tweeted a picture of himself mid-August of this year around preseason where he captioned it “When yo girl talking to some guy in the stands.”

"When yo girl talking to some guy in the stands" pic.twitter.com/0muEVuVqDP

So I tried to poke a little fun at Allen and responded to his tweet saying, “Thinking about the feeling of actually making it through a full season.” Adding an alternative caption to his tweet.

"Thinking about the feeling of actually making it through a full season." https://t.co/cK6CpJmMKz

Safe to say Keenan Allen cannot take a joke and he blocked me on twitter, so here he is on my list…

I’ve always been interested as to how PacMan Jones has played in the league for so long. The guy has been arrested so many times I’ve lost count and even got suspended for a full NFL season back in 2007.

PacMan was never a guy that I could really root for, it actually made me upset that guys would act so stupid when gifted one of the greatest job opportunities in the world. When you are a gifted athlete do your job and stay out of trouble, this is exactly the opposite of what PacMan Jones was all about.

Jones in 2015 during a game against the Oakland Raiders drew a $35,000 fine for slamming WR Amari Cooper’s head into the turf and drawing a brutal personal foul. I remember watching this game and thinking “Why do this to such a young player after the whistle has been blown on the play?”

My reasoning for Jones landing the number 3 spot on my list is all above in the video attached, there is just absolutely no room for that type of play in the NFL, and he also shares the field with a certain someone below…

Dez Bryant is one of the most loud-mouthed Prima  Donna receivers in the league today, and combine that with the fact he is a Dallas Cowboy and just that alone is enough to irk the hell out of me. Talk about a guy who is VERY easy to hate.

Does anybody on the face of MY FLAT EARTH besides Cowboys fans actually enjoy the sight of Jerry Jones? I would be surprised if you could name me 5. Jerry Jones and the Jones family as a whole are all about winning and could care less about if the players they employ are staying out of trouble or making the team look bad. For example, players like Greg Hardy or Ezekiel Elliot who is currently amidst a battle with the NFL over a domestic violence case. Or maybe Mr. Dez Bryant who has also had a history of domestic violence.

Add the Prima Donna attitude with being employed by Jerry Jones and having some domestic violence history and you are for sure making the damn list! To wrap up the number 2 slot I guess you could say the whole Dallas Cowboys organization is getting heat on this list, but Dez Bryant has never earned my respect throughout his career and I don’t see my opinion on him changing anytime soon. Same goes for Jerry Jones and the Cowboys as a whole, easily my least favorite NFL team. It’s hard to keep this one just about Dez but screw it, on to number 1.

Vontaze Burfict is one of the league’s dirtiest players currently playing on an active NFL roster. In my eyes, there is a fine line between playing the game of football in a more physical manner than others, and just playing the game of football dangerously with the intent to end careers and injure opposing players. If you don’t believe me, ask just about any other diehard football fan or most current NFL athletes that play on the offensive side of the ball.

There is all the proof in the world that he is dirty and plays the game to end careers, he has been both fined and suspended a numerous amount of times but has never seemed to stop his antics. Burfict is a guy most players and fans are just waiting for the day he retires because watching him play against your team on Sundays gives you a worrisome feeling in your stomach that no fan or player should have to deal with.

Players like this will never earn respect from me nor should they be respected by you. In a time where the league is preaching player safety as a top priority, it almost seems insane that Burfict is still only paying fines for hits and serving minor suspensions. Some fans and especially Pittsburgh Steeler fans might argue that Burfict should have been banned from the National Football League for good.

We are the voice of nosebleed fans across the country. Composed of journalists, athletes, take-nadoes and fans alike, we tell it how it is. No take is ever too hot and nothing is out of bounds.