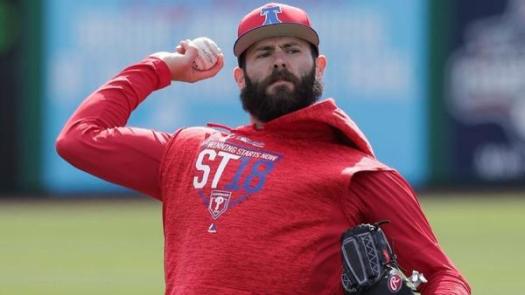 The light at the end of the tunnel has gotten brighter in recent days. The long winter is almost over, and the frigid temperatures of the outside cold and the (lukewarm at its best) hot stove are almost things of the past. As we get set for a summer filled with baseball, we continue our MLB season preview today, with the NL East.

Martinez brings an interesting dynamic to a solid core group that won 97 games last season. Long rumored to take on a managing job, the longtime Joe Maddon assistant has himself a strong spot to start his career in.

Matt Adams becomes the 2018 version of Adam Lind. Lind platooned with Zimmerman in 2017 at 1st, Adams comes over from Atlanta where he slugged 20 homers last year.

They are one of the teams rumored to be in on the Marlins stud backstop, JT Realmuto. He would extend the lineup and would be a significant offensive upgrade over Matt Weiters. They could also use a little depth in the rotation behind Scherzer, Strasberg, and Gonzalez.

Team X-Factor: OF Adam Eaton Adam Eaton returns this season after missing his entire first year in Washington. Replacing Jayson Werth with a healthy Adam Eaton at the top of the lineup could end up being one of the most underrated switches in the league.

The Nationals figure to be the best team in the NL East this season once again. While much of the division has improved around them, they still have more talent and depth at more positions than anybody else around them.

This would be a good start to place for most teams, for the Marlins it was a good place to start trading everybody.

Team needs: Everything, a fan base

Not much to say for what the Marlins are trying to do here. They traded away three legitimate all-star level outfielders and a viable leadoff hitter for essentially Starlin Castro, Lewis Brinson and a few minor leaguers. They are clearly not going to be competitive this year, and the sale of the team continues to seem more and more shady by the day.

The Kemp trade to Los Angeles provided a few things for the Braves. Firstly, they received two major league quality starting pitchers in McCarthy and Kazmir (assuming Kazmir is able to fully make it back from his hip injury this season), who have the potential to be much better than last year’s R.A. Dickey/Bartolo Colon experiment. It also clears Matt Kemp’s massive contract off the books as well as giving them room to give younger players opportunities at the major league level.

Dansby took a step back last season during his sophomore campaign, much to the dismay of the Braves faithful that has begun to entrust as a new potential face of the franchise.

The Mets had one of the more under the radar offseasons of any team in the league. They added a stud for the end of games in Anthony Swarzak, brought in some serious power in Bruce and Frazier, and added a couple of veterans in Gonzalez and Vargas that should help stabilize and sure up both the clubhouse and the on-field product. In addition, they retained Jose Reyes, and should have their healthy crop of starters together for the first time ever!

David Wright hasn’t played a major league baseball game since 2016. He played 37 games that year, just 38 the season before, and has always had major injury concerns. The Mets won’t commit to walking away from their captain, but with more news that he won’t begin baseball activity for at least two months, you have to wonder if the Mets will start to reconsider their options with Wright.

It starts with a healthy Noah Syndergaard. Then, Jacob DeGrom. Not far behind waits Matt Harvey, Steven Matz, and Zach Wheeler. This was the roatation we saw coming a few years ago that was supposed to take the Mets to the next level. We saw glimpses during a World Series run a few years ago. Will this rotation finally stay healthy and pan out? And how do we factor in Jason Vargas exactly? Only time will tell.

I really think the Phillies are going to be in the mix for a second wild card spot for a good portion of the season. The addition of Jake Arrieta late in free agency could prove to be huge as he will give a young rotation a clear ace. Santana should provide a nice switch-hitting power bat, but they could still use another veteran bat or two, perhaps take a flier on a Melky Cabrera, Jayson Werth, or even JJ Hardy.

He was the young stud the exploded on the scene at the end of the year last year for the Phillies. Maikel Franco should provide him some protection in this lineup, and new manager Gabe Kapler will have a few different options when it comes to his filling out that lineup card.

Odubel has been a great player through his first three seasons in the Majors. His batting average has dropped every season however, and there have been those in the media that question his hustle and attitude at some times. Odubel is a good player, he needs to keep his focus completely on helping the Phillies win games and get on base for the young, powerful heart of the order.

2018 should be a competitive season for three teams in the NL East. I believe the Nationals will once again reign supreme, but the Mets could throw a huge wrench in their plans and fight for a wild card berth if their rotation can stay healthy, and they get productive seasons from Yoenis Cespedes, Michael Conforto, Amed Rosario and others thoughout the lineup. Philadelphia is much improved and should also take a major step forward. Oddly enough, the three teams mentioned above all hired new managers this offseason, which also will be a big storyline to watch.

The Marlins and Braves have a lot of work to do, and as the season goes on we will get more of a sense of how things go. Will they trade more players? Probably!

For a preview of the NL Central, check back tomorrow for Squish and a look at his Cubbies and the rest of the division.

We are the voice of nosebleed fans across the country. Composed of journalists, athletes, take-nadoes and fans alike, we tell it how it is. No take is ever too hot and nothing is out of bounds.